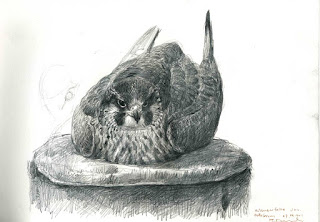 A quick study of a juv.Peregrine today morning in Munich zoo...

Unknown hat gesagt…
This is a study? My pencil studies should look so good! I always admire work like this, the way that the lines flow in a natural, spontaneous way.
9:37 PM

Fran A.H. Alvarado hat gesagt…
Hi Paschalis
It´s fantastic you are so near from the zoo in Munich, so we can see your gorgeous work.
Regards
1:27 PM

Jenny Woolf hat gesagt…
"Quick study" - it would take me about 10 years to do something as good as this!
9:03 AM