It was a cold and foggy morning yesterday in the Nymphenburgpark but I decided to defy cold and I`ve been rewarded with the study of this Tawny owl. Gouache colours 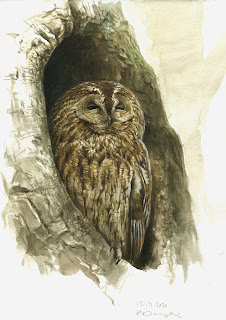 Oktober 07, 2018
..The Thylacine is a legendary species which lived in Australia and Tasmania and seems that is already extinct, since there is no credible evidence that the animal still exist for decades now. Attached, my efforts to depict the animal, starting with the initial pencil drawing , and showing the process step by step to the finished pen drawing. Eventually , I noticed several mistakes on his anatomy, decided to revise the image, started a couple of watercolours, and managed to complete at least one . Forgot to mention that videos taken in Hobart zoo( Tasmania) in the 30`s of last century have been a great help while creating my image. The finished watercolour , I managed eventually to complete
Kommentar posten
Mehr anzeigen

More raptors from the past

September 23, 2020
I`m just back from Brittany/ France spending there three memorable days in Festival Art et Nature in Paimpont where I was privileged to be the guest of honour. I met old friends , many new ones, and I feel grateful for their kindness, support , generosity and hospitality. I hope to be able to go back in the nearest future! Many thanks in particular to Sebastien, Willy and Anne!       Orang utan sketch based on sculpture by Anne Smith Bird head sketches from memory Great cormorant study from life Sparrowhawk sketch based on photo of Patrick Trecul A Genet study based also on a photo of Patrick Trecul who was my neighbour in the exhibition Two extinct species drawn from memory A Przewalski horse sketched also from memory various sketches explaining things
Kommentar posten
Mehr anzeigen